If you are here, then you’re probably looking for the best boundary microphone.

Boundary microphones, also known as PZMs (Pressure Zone Microphones) are a special kind of microphone that use the boundary effect, which is a sound reflection effect due to standing waves accumulating at walls. They’re rather oddly shaped, and in fact, do not resemble normal microphones at all. They are very useful though, with their shape allowing them to pick up sounds from several different directions. By placing them against a surface, such as a tabletop or a wall, they will be able to capture the sound coming from not just a single source, but of the entire environment (such as all members in a meeting). Since no reflections enter the microphone, the boundary mic will be able to reproduce the sound very clearly.

There are many different kinds available in the market, ranging from cheap, low-quality microphones to expensive, high quality ones. After extensive research, we have narrowed down all of these to two options, namely the Crown PZM 30D and the Audix ADX60.

What am I looking for in a good Boundary Microphone?

There are several features that make a boundary microphone a good one. Good boundary microphones have durable, flat shapes, with their capsules close to the floor. Not only does this allow for better capturing of sound but also prevents people from tripping over it.

Boundary microphones have a hemispherical pickup pattern, allowing them to capture omnidirectional sound as well as preventing them from being affected by sound vibrations and reflections from the surface that they are placed on. They also have extended frequency response to capture natural sound waves.

With these features in mind, its time to talk about the Crown PZM 30D and the Audix ADX60 and see how they measure up and which one you should choose over the other. 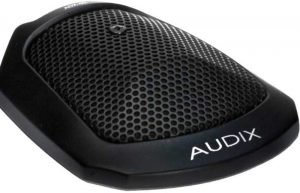 The Crown PZM 30D is a high-performance boundary layer microphone designed for broadcasting, recording, and sound reinforcement. With the capsule being mounted in the pressure zone i.e. the place where reflected and direct sound are in phase, the microphone is able to attain a 6 dB greater sensitivity.

Being omnidirectional, the Crown PZM 30D has an amazing hemispherical polar response, which it exhibits when placed upon a surface, allowing it to pick up sounds from literally every direction. Once positioned on the surface, the PZM 30D will not only capture the direct sound waves, but will also reject waves and vibrations coming from the surface on which it is placed. This allows the output of the microphone to be of high quality with little phase cancellation.

The Crown PZM 30D is beautifully crafted. The boundary microphone is 2.5 inches in length, 3 inches wide, and 0.375 inches tall. These dimensions give the PZM 30D a flat shape. As previously mentioned, a flat shape is very important for a well-functioning boundary mic, preventing it from reflecting sound as well as from being a tripping hazard. Its shape also makes it very easy to place on walls, tables, or any other surface.

The Crown PZM 30D is also very durable, particularly because its detachable XLR connection does not hamper its durability as it would for cabled boundary mics. It comes in a low-profile metal casing which is very rugged, further adding to its durability and making it suitable for heavy duty applications.

The Crown PZM 30D has two selectable frequency responses (flat/rising), providing it with greater flexibility in the placement of the microphone as well as sonic character. The frequency response is between 20 Hz to 20,000 Hz. The flatness of this response allows for the natural mic sound. The rising frequency response option on the other hands adds a crisp attack on drums, piano, and percussion.

The low frequency response depends on surface size. Tested on an infinite surface (floors, walls, etc.) the low-end frequency response reduces at and below the frequency 750/D (D being the shortest boundary dimension measured in feet). The output of the microphone reduces by 6 dB at an approximate frequency of 188/D.

The Audix ADX60 is a professional pre-polarized condenser boundary microphone. It is designed for studio, broadcast, and stage applications, and is highly sensitive, able to handle distance and area mic needs for a wide variety of applications such as theatre, musical performances, and meetings. The ADX60 is designed to give off a very natural sound.

Although many boundary microphones have omnidirectional capsules, such as the Crown PZM 30D, the Audix ADX60 is in fact a cardioid microphone. Although not exactly like a hemisphere, when placed against a surface, the Audix ADX60 is able to exhibit a pickup pattern which is very similar to it. This allows for the microphone to be able to capture sound coming from any direction from wherever it is placed.

The Audix ADX60 has a length of 2.56 inches, a width of 3.15 inches, and a height of 0.83 inches. Similar to the Crown PZM 30D, this microphone is also very flat. This allows it to capture direct signals to it without rear reflections, which is a very desirable quality in a boundary microphone.

One of the biggest advantages of the Audix ADX60 is how durable it is. Its unique design makes it very difficult to damage or snap, and can also handle a lot of weight before being damaged. Like the Crown PZM 30D, this microphone also has a detachable XLR connection, preventing it from experiencing problems that are faced a lot more frequently by cabled microphones. All of these qualities allow it to be a long-lasting boundary microphone.

With the frequency response of the Audix ADX60 being between 50 Hz to 18,000 Hz, we can tell that the response of the microphone is relatively flat yet also fairly colored.

The presence/high-end sensitivity boost is very beneficial in broadcast applications as well as musical recordings, allowing the microphone to pick up brighter characteristics, details, and sound within a room.

Despite the low-end response being seemingly weak and at only 50 Hz, when we listen to the microphone, we will still be able to hear low-end and mid-frequency responses enough to make the microphone practical enough for a variety of different applications.

After looking at both the Crown PZM 30D and the Audix ADX60, we can see that both of these microphones are excellent for capturing sound despite being slightly different from one another. The choice between the two depends entirely on what you’re looking for.

If you’re looking for greater sound capture and reproduction quality, then you should go for the Crown PZM 30D. On the other hand, if you’re looking for a durable and reliable boundary microphone, you should choose the Audix ADX60. Regardless of whichever one you end up choosing, you’ll have an amazing boundary microphone that is perfect for recording audio from conference rooms, concert halls, sporting events, and numerous other scenarios.

Q: What is the best microphone for a computer?

Q: What is the best mic?

Q: What is the best vocal mic?

Q: Which boundary mic for piano?

A: You can also use two small cardioid condenser mics three feet from the piano and five feet above the floor for a more natural piano solo sound. 2) Boundary Microphone It is a small-sized omnidirectional condenser microphone with the diaphragm placed parallel to the surface, so it will pick up the vibrations from the sounds reflecting off the surface it is mounted to.