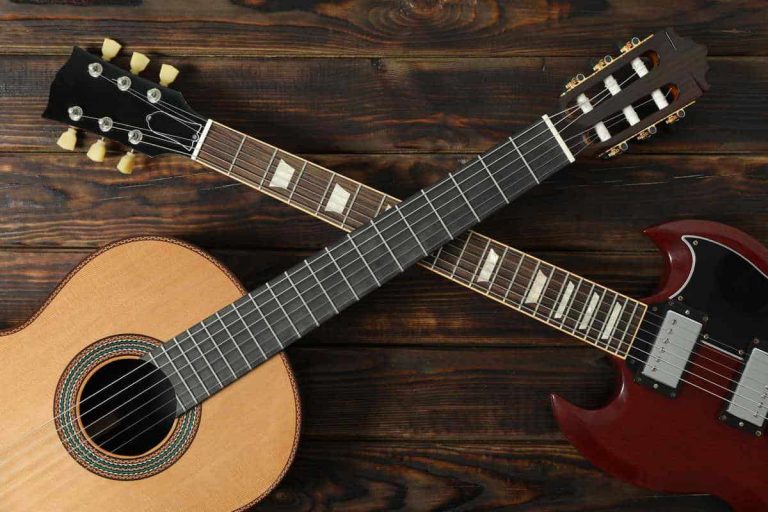 What is an Acoustic Guitar?

An acoustic guitar is a type of guitar that uses steel, nylon, and/or gut strings instead of the usual type of metal. They were invented in the mid-1800s and in some cases prior to that, but they became more prevalent after that time. It’s made from wood and doesn’t rely on electronics to produce sound like most modern guitars. Acoustic guitars are sometimes confused with an acoustic bass guitar, which has a similar design but a bigger body size and fewer strings (six or eight). Most acoustic guitars have six strings.

Acoustic guitars can be played using a variety of techniques including plucking, strumming, and flat-picking. The sound that an acoustic guitar produces is a result of the vibrations of the string that are being plucked or strummed by the player. These vibrations are then amplified by the body of the guitar and sent through an amplifier where they have finally amplified again before reaching your ears to create sound.

Many acoustic guitars have a body shape akin to a dreadnought, but smaller versions exist as well. Others come with cutaway bodies and some do not. The necks on acoustic guitars also vary but the most common is made of maple or mahogany wood and has 22 frets. Most acoustic guitar bodies are made from hollow hardwoods. It’s only recently that luthiers have begun making them out of carbon fiber and other materials to reduce weight, although this isn’t very popular yet.

What is an Electric Guitar?

An electric guitar is a guitar with an electronic output, typically without a soundbox. Most often the sound is either amplified through a speaker or played through an instrument amplifier using electric guitar pickups. It plugs into an amplifier to produce the desired tone and volume needed in the performance setting that it’s played in (live or recording).

When guitarists speak of an electric guitar, they are typically referring to the popular Fender Stratocaster or Gibson Les Paul guitar models which were introduced prior to the 1950s. The term “electric” was coined by the first successful hollow-bodied electric guitar, which was invented by Les Paul.

The first mass-produced solid-body electric instrument was the Fender Telecaster (or Tele), produced from 1950 to 1959; however, solid-body electrics were experimented with as early as the 1920s. The first commercially successful solid-body guitar was the Gibson Les Paul (popularized by Buddy Holly in 1957), which did not appear until 1958. Solid-body electrics became popular with bands in the United Kingdom, where they were used for much of the 1960s and 1970s. The solid-body ES-335 had a smaller body than Gibson’s Les Paul instrument but could still produce the same sound because it did not have to be amplified as loudly or with as much power to project through large venues.

Difference Between Acoustic and Electric Guitar

The electric guitar produces a distinctive sound through regular use, but that sound will change throughout the life of the instrument. The tone produced by an electric guitar depends on where it is played. For example, an acoustic guitar playing near water will have different sounds than similar guitars playing in an auditorium or in a garage. The choice of whether to play an electric or acoustic guitar depends on personal preference and musical genre.

A traditional acoustic guitar has a body made of wood. The main types of wood typically used are spruce, mahogany, and rosewood. Acoustic guitars sound brighter than electric guitars because the “voice” (or the vibrating string) is transmitted through the hollow body.

A guitar is a stringed musical instrument with frets and an electrum neck that is usually played by strumming or plucking the strings with the fingers. A guitar consists of at least one, but commonly more than six, strings stretched around a neck. The most common tonal wood for a neck is maple, but it can be made from other wood types such as mahogany or rosewood.

Electric guitars are better for beginners because their built-in preamps make amplification easier. Acoustic guitars are more sensitive to the environment, so they’re not ideal for live performances.

It may seem like an age-old question, but there is still no definite answer as to what is better – an acoustic or electric guitar. Electric guitars are generally cheaper and easier to use than acoustic ones, so they’re perfect for beginners who want to play without spending precious time figuring out how their instrument works.

Is electric guitar easier to play than acoustic?

Is electric or acoustic guitar better?

First and foremost, assuming that they are properly adjusted, electric guitars tend to be better received than acoustic in terms of playing. Less expensive acoustic guitars, i.e acoustic guitars for beginners, tend to have a higher action.

Acoustic electric guitars for beginners can look and sound completely different, but there is also differences in what they’re like to play. The main difference between playing an acoustic and electric guitar is how they feel. Acoustic guitars are bigger and bulkier and the strings can feel tight.

Should a beginner learn on an acoustic or electric?

Q: How does an acoustic guitar differ from an electric guitar?

Q: What are the differences between acoustic and electric guitar?

A: Ease of Playing. Electric guitars may have more components,but playing it can be easier than playing an acoustic guitar ( 4 ). Volume Control. Acoustic guitars have only one volume setting,but with electric guitars,you have full control over the volume via a dial on the guitar. Sound Options. …

Q: Should you buy an electric or an acoustic guitar?

A: We have made a broad generalization here and declared the electric guitar to be more playable than the acoustic – that, typically, it feels easier on your fingers – but there are trade-offs, and we shouldn’t mistake playability and ease of playing for ease of actually learning the instrument. It’s more complex than that.